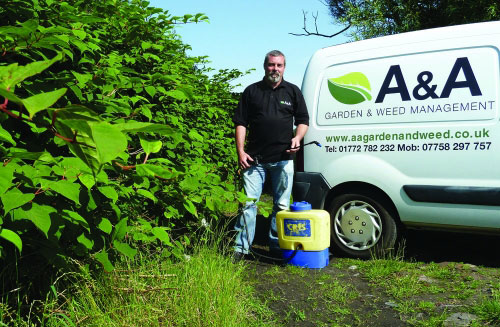 If you’re fighting a losing battle with weeds or you’ve a jungle in your garden, it’s time to give Alan McMonagle a call.

With over 20 years’ experience in sports turf management and weed control, this former greenkeeper can tackle anything from the common dandelion to more invasive weeds such as Japanese Knotweed, Mare’s Tail and Himalayan Balsam, plus Giant Hogweed and Ragwort, which can cause harm or injury. All are managed with specially licensed chemicals.

Alan trained as a greenkeeper at Myerscough College, and after many years working for golf clubs, including ten years at Longridge golf club near Preston, he went to work for a weed control company as a sprayer-superviser and excavations manager.

After becoming fascinated by weeds, especially Japanese knotweed, he branched out on his own setting up his own company. Customers include Wyre Council, Nat West bank, the Obas Group of Longridge and Tabor Retreat, Fulwood.

He offers a free on-site consultation to domestic and commercial customers and can chemically treat weeds in and around water.